Cave hunting in a forest with the new eXp 4500 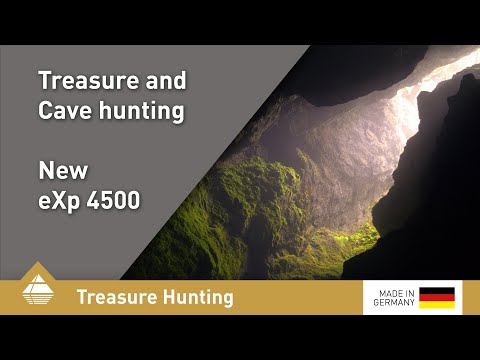 Most treasure hunts are inspired by myths and legends - so is this:
We've heard of stories that tell about people who hid in caves in the midst of that forest in the 16th century. We were searching for those caves – expecting to find hidden objects inside.

First of all it was not only about finding caves, but the right cave. By using the different scan modes of the treasure detector eXp 4500 we found more than just caves.

Iron signals were detected with the magnetometer function of the 3D metal detector eXp 4500. The nature of the find became clear on closer inspection.

When it comes to details: Treasure detector with pinpointer function

The exact position of the supposed treasure has afterwards been determined with the pinpointer. Thus, only little digging was necessary to recover the detected object: The treasure find is apparently a part of an old tool.

The 3D Ground Scan feature is perfect for treasure hunters and archaeologists looking for underground artifacts, treasures and historical objects. However, with this scan mode it is possible to locate not only ferromagnetic objects but also voids.

For meaningful analyses, a previously determined field must be systematically scanned to collect sufficient data for the visual representation. This is generated step-by-step in the display and allows further analyses.

Whether our expectations of exciting treasures will be fulfilled will only be revealed after the continuation of the expedition. Until then: Enjoy the video and discover what the new eXp 4500 detected.

Tags: CavesCavity DetectioneXp 4500eXp SeriesTreasure Hunting
* All citizens of the EU are required to pay 19% value added tax (VAT) according to the German law.
BACK TO TOP